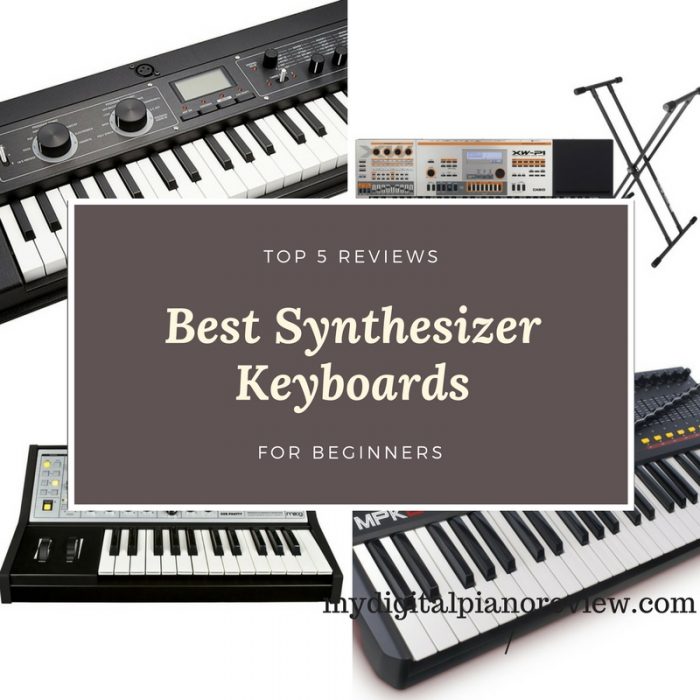 Piano keyboard has several revolutionary effect. Now, the synthesizer keyboard is one among the variety. It is an electronic musical instrument which is widely used these days. The instrument generates signals which is again converted through the tools like headphones, amplifiers as well as loudspeakers. This will be attached to your musical instrument to create a boost in your musical performance. We are going to discuss the best synthesizer keyboards for beginners.

An individual named Bob Moog has created an instrument. Bob was not a musician, rather he was only an electrician. The device he invented was enough to challenge the traditional sound generation devices. This was the synthesizer. An instrument that contributed in the electrical world of music. The electronic world of music is now boosted with the synthesizer.

Before buying a synthesizer keyboard, it is important to see whether it meets the criteria for a beginner, intermediate or a professional. In this article we are discussing about the best synthesizer keyboards for beginners. Following are the guidelines:

But, the digital synthesizers are little different as compared to the analog variety. As a matter of fact, it is more advanced formula in a synthesizer. This runs on the sounds that is created digitally sound signal. The sounds can be further altered or manipulated by the computer.

Casio XW-P1 synthesizer is often said the true performance synthesizer. This is a monophonic synthesizer, but it speaks on quality. You will get features like beautiful drum sounds, high quality strings as well as organic instrument. It comes with 61 keys which works well to fulfill the beginner’s requirement. It is also a professional synthesizer keyboard which has 400 fully sounds with editable variation. The Casio XW- P1 synthesizer also comes with 9 sliders.

Casio XW- P1 synthesizer is a versatile keyboard which include the drawbar organ, programmable solo synths, varied tones, etc. All of them are editable. You also get the SD card slots. As a result inserting the USB inside it is quite easy. The users can get two types of touch response in it. The synthesizer are many more features. User’s rates is 4.5 out of 5.

This is one among the modern day synths available in the market. You will be able to enjoy 128 sounds onboard through the Korg MicroKORG XL synth. The size of the synth is very small and cute. It has 37 mini keys. The sound released after playing the synth is really amazing. The most important advantage of this musical keyboard is its affordability. You can now get the original synth from Korg once you are tuned to the online shopping sites.

Korg MicroKORG XL synth is the beginner’s level synth with 37 keys. This features makes the learning process less complicated. The users will be able to learn playing those keys easily. The portability feature is another plus point with the synth. You can move it from one place to another easily without trouble. The usb slot helps to get the microphone attached. The sound quality is really good for this level. Users rates it 4.8 out of 5.

The Roland Juno – Gi is a variety of synth which is known for its legendary quality. You will be able to realize the creation of the mobile synth experience with the same. It comes with 128 voice polyphony with a wide library of voices. You will be able to go ahead with the live performance through its 1300 high quality sounds. The Roland Juno – Gi also has eight track digital recorder.

Roland Juno – Gi is a powerful keyboard altogether. You get the digital recording function with the device. The stage performers can be benefited with the same. The synth also comes with the multi- track function. The sound quality is also awesome. The light weight synth is also really portable. You can carry this light weight digital piano from one place to another without any trouble.

Have you ever have a view of the vintage synths? Yamaha DX-7 is the one to be considered. The instrument was released in the year 1983. This is one of the most affordable variety of synth which have a wonderful sound quality. You will get a good control over the device. This particular devices is also used by the stage models and the lead musicians.

The Yamaha DX-7 is a well-known FM synth. It has now become a successful digital synthesizer. You don’t need to worry about the price as the device is not very expensive. It has a very good sound quality. The synth also comes with 32 patches of memory. The 61 keys associated with the device is suitable for the beginners using the synth. This is the wonderful device which allows the user to play and record their music in finger tips. Users rates it 4.5 out of 5.

This is a variety of analog synthesizer that comes with 25 semi weighted keys. For the beginners this will be a great option as it does not have many keys which is likely to make it complicated. The user can control the synth immediately with the help of its ultra-stable variable wave. It comes with wide range of classic as well as modern sounds. The musical instrument comes with dual oscillators with its analog signal path. Moog LPSSUB001 is one among the powerful mono synths.

To conclude, the Moog LPSSUB001 Sub Phatty analog synthesizer is one among the best synths available in the market. It has the analog variation. But, the usability for the beginners will be perfect with its 31 knobs and 13 keys. It comes with the on board noise generator. It is 25 semi weighted keys which is really affordable in the market. It has got inspiration of its designing from the classic synths. The editor and librarian software is also included with the particular device. It is quite popular and user rates it 5 out of 5.