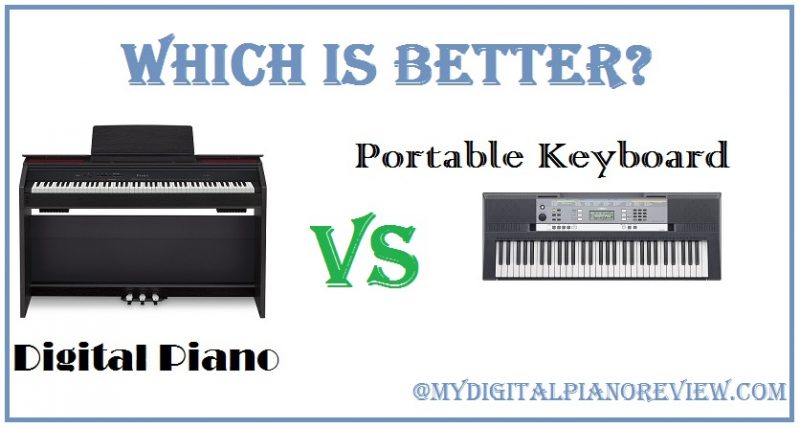 There can be a number of reasons why you could be thinking whether to buy a digital piano or keyboard and which would be the best one for your needs.

Whatever your situation is, this review will help you to decide which is better for you: a digital piano or a keyboard.

What is the Difference Between a Digital Piano and a Keyboard?

First of all, it is important to understand the difference between a digital piano and a keyboard. Depending on your specific needs one could be more suited to you than the other. And, just because they are different, doesn’t mean to say that one is better than the other.

However, there can sometimes be confusion between a digital piano and a keyboard because the row of keys on a piano is also called a keyboard. However, in this review, the term “keyboard” will refer to the musical instrument.

A digital piano is built and designed to be a close as possible in feel and sound of a real piano. When playing top of the range digital pianos it can be very difficult to tell the difference that and an acoustic piano.

A keyboard is more designed for its digital features and portability. Keyboards usually don’t have the full 88 keys that a piano has. Also, the keys don’t have the piano ‘hammer’ action but have a lighter feel to them. Although, some high-end keyboards can have keys similar to a digital piano.

Features of Digital Pianos vs Keyboards

This review will now look more in-depth at the differences in features between digital pianos and keyboards.

Size of the Unit

Digital Pianos are large in size and heavier as well. Usually, digital pianos will have all the octaves found on a ‘traditional’ piano, therefore, the length of it will be around the same. While digital pianos can be portable, many of them are meant to stand in one place without being moved very often.

Keyboards are much smaller and lighter. Usually, keyboards only have between 49 and 61 keys and are very portable. This means that they can be stored much easier as well, and even played on a table top.

Digital Pianos have keys that mimic the feel of a ‘real’ piano. Even many of the cheaper digital pianos do a good job of mirroring the feel of a piano. For example, the keys of a piano are fairly heavy and solid. Usually, the bass keys have more resistance and as you play higher up the keyboard, the keys are more sensitive.

In digital pianos, this is called Graded Hammer or Scaled Hammer Action. So, the harder or softer you play a note will be reflected in the volume.

Keyboards usually have lighter keys which have a more plastic feel to them. They usually aren’t touch sensitive, so it doesn’t matter how hard or how soft you play a note, the volume will be the same. However, that in itself isn’t a negative factor; it is just a feature of keyboards.

Keyboards usually have an inferior sound when it comes to sounding like a real acoustic piano. However, what keyboards lack in mimicking an acoustic piano they make up for in a wide range of other sounds, voices, and effects which are not a feature of digital pianos.

Digital pianos are more expensive than keyboards. However, this is because you are buying an item which is very close to the real thing. Entry level digital pianos can cost as little as $300. But if you want a good digital piano, expect to pay between $500 and $1,500 for it.

Keyboards are much cheaper starting at around $50. However, for a good keyboard, you should expect to pay somewhere between $150 and $300.

The Bottom Line on Digital Pianos vs Keyboards

In the end, it all comes down to what you want to accomplish with your piano or keyboard.

If however, you are more interested in making digital music or recording your music in a home studio, then a keyboard will suit you better. This is because keyboards are more portable and have a wider range of special effects which you won’t find on digital pianos. Also, if you are on a limited budget, then a keyboard will work out cheaper for you.